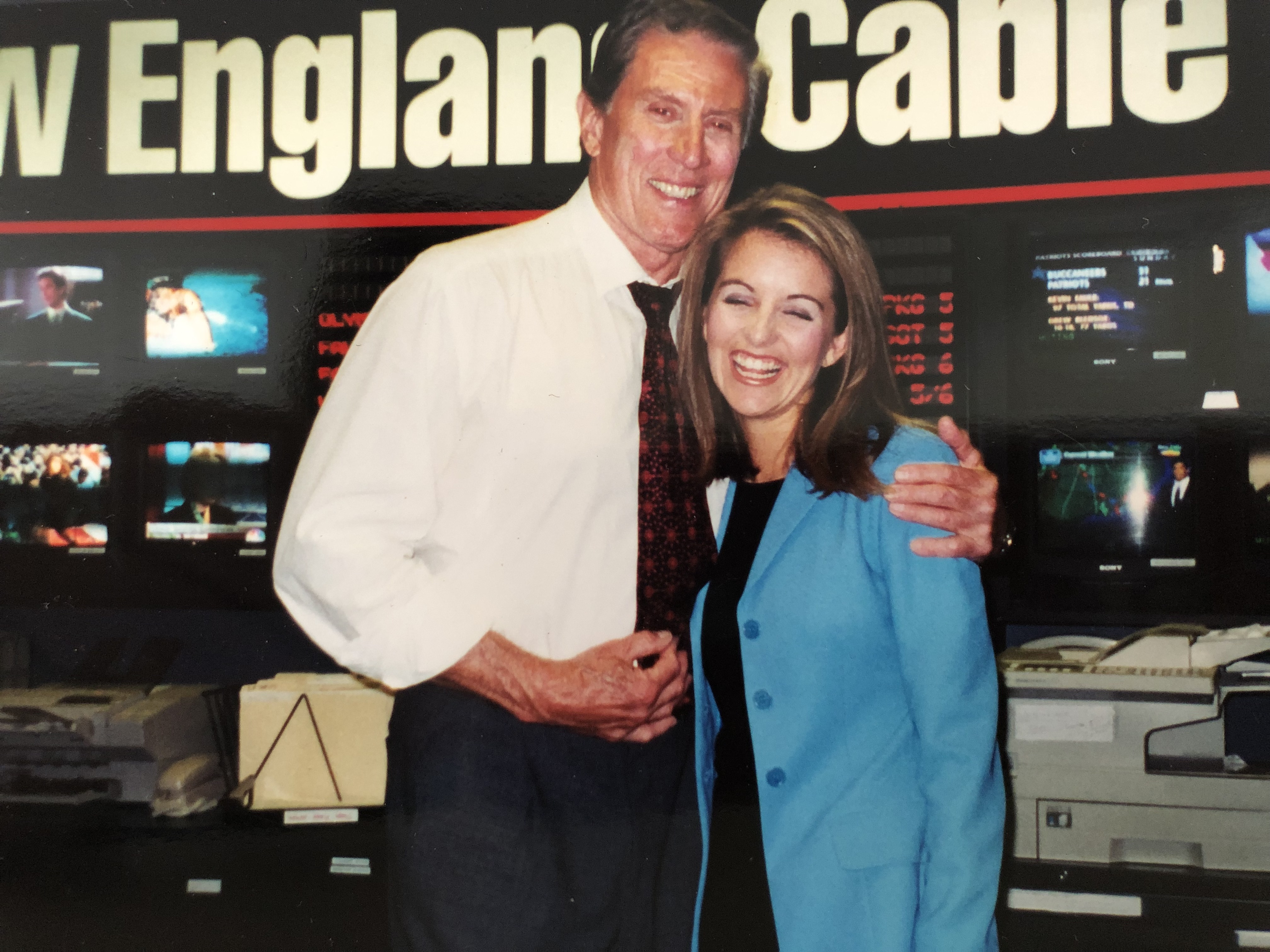 Watching the Fred Rogers documentary, Won’t You Be My Neighbor, felt like attending the memorial service of a lifelong friend. At the end of the documentary, right before the lights come up to reveal your swollen, crying face, that’s when Mister Rogers asks you to take a moment to think about the people who loved you into being. The people who loved you into being. As if my face wasn’t already wrecked enough, I burst into tears and took a moment to think about this one particular man… and about that time that I was . . .

I was a dime a dozen. A TV news intern with big dreams. A. Dime. A. Dozen. The first time I walked into a newsroom was in Boston, one of the largest news markets in the country and one with a centuries old journalism legacy that can trace its roots to the American Revolution. It felt like a big deal.

I hadn’t been there for five minutes when all hell broke loose. The scanners screeched. The journalists managing the assignment desk started yelling as loudly as they could. News was breaking. Reporters and photographers rushed for the exits, absorbing barked instructions. The anchor zipped across the room to get to the set. Producers put on headsets. Directors quickly ordered and made sense of in-studio camera shots on-the-scene live shots. It was as urgent as if the TV station itself was on fire. And then––in three, two, one.

And after a beat. Warm, wise eyes looked up through the camera, connecting with every person watching as if they were in the room. The look of an old friend who is about to share something difficult. And then a calm steady voice began to speak with a deep tone that gently sits you down and commands your full attention.

It was extraordinary. Those eyes, that voice belonged to Tom Ellis. He was a legend for a reason. No one could do it better.

And there I was, in the middle of the newsroom, watching this entire episode unfold. I knew in an instant: This is where I belong. These are my people. This is my mission. And I want to learn from that man.

And yet, I was a dime a dozen. But not to Tom. He introduced himself and asked me why I was there, what my goals were. And I told him.

“Well, then,” he said. “We are going to make you a star.” And here’s the thing. He was dead serious.

When it came to storytelling, videography, editing, and lighting, the team at NECN was the best in the business. Period. Every shift was a masterclass. I headed out with crews, learned how to write for television, practiced my on-camera skills, all on deadline with the help of this ultra-talented team. And at the end of my shift, long after the 11pm news, Tom was still in the building. He was watching the newscast back, analyzing his performance, setting his sites on what he would improve upon tomorrow.

A striking intention given the fact that by this time, Tom had already been a top journalist for decades. He’d covered that fateful arrival of John F. Kennedy in Texas, was one of the last people to interview the president alive. He’d risen to the heights of anchoring in New York City, the top of the heap. He had seen and heard it all. And by now, who would blame him for resting on his talent, using muscle memory and experience to mindlessly execute a newscast?

And yet, there he was, making plans to be even better the next time. This is how he closed out his shift and then began his long drive home. But before he hit the road, he stayed even later to take time for me. Critiquing my work, he pointed out what I got right, what needed work. Every shift, every attempt, without fail.

He delivered his feedback with honesty and with something else––complete belief that I could overcome every obstacle, that I could learn every skill, that I could polish every strength. It was never condescending, nor impatient, nor incomplete. He never overlooked any success, no matter how small, how insignificant. He didn’t linger on failure, either. It was all part of the journey. Like a blacksmith, honing a craft over a lifetime, that’s how he practiced journalism, and that’s how he taught it. He took me seriously. And I lived to impress him.

Years later, as an investigative and general assignment reporter, I could hardly wait to call him with the news that I had won an Emmy award. Part of that award belonged to him and the hours he invested in me.

More time passed and I began to shape my craft for a new purpose, fulfilling a long-held dream to become a children’s book writer.

It wasn’t easy. In fact, it was just as impossible as breaking into television. And there were moments when failure seemed certain. Rejections stacked up. Finding the time and space to study and improve was itself an unsolvable matrix some days. Other times, well, it was emotionally tough. To want something, to work hard for it, to give it your all, and fail.

It was during this time, I found myself sitting in my new city of Portland, Maine (my fifth move in three years.) My children’s book writing career was starting to look like a non-starter. The mother of young children, I’d gotten up early, devoted every naptime, plucked five minutes here, ten minutes there… and yet, nothing. Honestly, it started to feel tough to justify the time. It started to feel self-indulgent to keep going.

And then I got an e-mail from Tom and it went something like this.

My dear Anna, is there anything that you have set your mind to that you haven’t accomplished? You can do this, too. I look forward to seeing your books in a bookstore.

Friends, when I received this e-mail, I wept. I wept because he was serious––despite the fact that, yet again, I was a dime a dozen. Not to him. He was serious. He believed in me. And I believed him. I took a deep breath and I kicked into a fifth gear I didn’t know I had.

And last summer, my first book was published. Friends, I have six more books coming out. SIX. What’s happened is bigger than the biggest dreams I could muster. And just as part of my Emmy belongs to Tom Ellis, so do my books.

Maybe you didn’t have a mentor like Tom, maybe you haven’t had the opportunity to be that kind of mentor for someone else. Let me share with you what he taught me. Believe it. Pass it on.

Don’t Give Up: Tom left home as a teenager. One can assume that whatever lead to his decision was painful and hard. On his own, Tom had to support himself so he became a sideshow barker. Just like he could attract a crowd to the carnival, he could draw his television audience ever closer . . . to listen carefully to what he had to say. He did not arrive in the anchor chair by taking a conventional path. But he still got there.

Watch it back: This is a TV term. After the broadcast, watch it back. What did you get right? Celebrate that. What do you need to work on? Put it on your to do list. This can be applied to everything. It’s not punitive. It’s honest, thorough. We aren’t on this planet to rest on our talent, to give 50%. Right now, in our complicated world, we need nothing less than all you have and all you can still be.

Give To Others: He could have been a prima donna. I mean, honestly, he’d earned that. And yet, he was generous with his expertise and with his cheering. He was the mom in the Olympic audience losing her ever loving mind at her daughter’s success. His joy for the accomplishments of others was as deep and true as it could be because he invested hours in their success and confidence.

Embrace Fear: When Tom felt nervous before a newscast, it made him happy. That’s the reaction of a man who understood the role fear can play in success. It can make your effort sharper, more focused, more on point. Friends, I have never forgotten this. If you feel afraid, know you are about to do your best work.

Build Your Team: Tom didn’t operate in a vacuum. He had lifelong friendships, deep and true. And most of all, he had Arlene, the wife he adored. She was and is a dynamo. If Tom loved you, well, then so did Arlene. She was in his corner. She had his back. She cheered him on, every step of the way. Build your team. You’re gonna need them.

Believe: Believe in yourself like you believe the sky is blue and rain will fall. And tell the people around you how much you believe in them. Today might be the day that someone you know is ready to give up on a dream and your words will be the wind in their sails, exactly what they need to complete the freaking quest!

For the rest of my life, when I stop and think about the people who have loved me into being, Tom will remain high on that list. Now, as I grieve Tom’s death, I am grateful for the incredible gifts he gave me and so many others. Friends, I wish us all such a legacy. In the meantime, I want you to know I believe wholeheartedly in your dreams and all that you can do, all that you can be.

Anna Crowley Redding is the author of Google It: A History of Google, How Two Students’ Quest to Organize the Internet Changed the World. And available now for pre-order, Elon Musk: A Mission to Save the World!

P.S. Hey, Thanks for stopping by! Want to read more posts like this, sign up for my newsletter!

16 Responses to “If Not For Tom Ellis: The Mentor Who Changed My Life and the Lessons he Leaves Behind”