Want to know what someone is thinking and how their thought process took shape? No quicker way to solve that mystery than to find out which books they read. When I researched Elon’s life for my book Elon Musk: A Mission to Save the World, I also looked into what he reads, which books influenced him, and how. These books and even comics are highlighted in my book with a recurring sidebar called “Bookshelf” to spotlight these titles. But, Reader, I’ve got them right here for you to peruse! Yes! 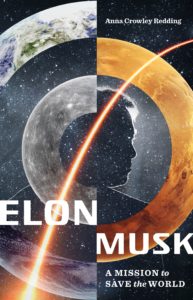 Elon’s work life often includes book inspired ideas and book inspired Easter Eggs in the products his companies build. “Don’t Panic” blazoned across the screen of his roadster flying into space. That came from a book. His drone ships are named after elements of his favorite books. Reading isn’t just for pleasure with Elon, it is also how he tackles topics that are new to him. When he thought of building rockets, the first thing he did was grab a stack of books.
So, want to read like Elon? Here’s your Elon Musk reading list!

Happy Reading! And remember Launch Week is coming. My new book, Black Hole Chasers, about the global team of scientists who came together to take the first picture of a black holes is publishing next week! I have fun giveaways planned, so stick around!

Anna Crowley Redding is the award-winning author of six nonfiction books including Elon Musk: A Mission to Save the World. Her next book Black Hole Chasers is out in stores October 5th. Anna began her writing career as an Emmy award-winning journalist. She lives in Maine with her husband and five kids.

Want to keep in touch?