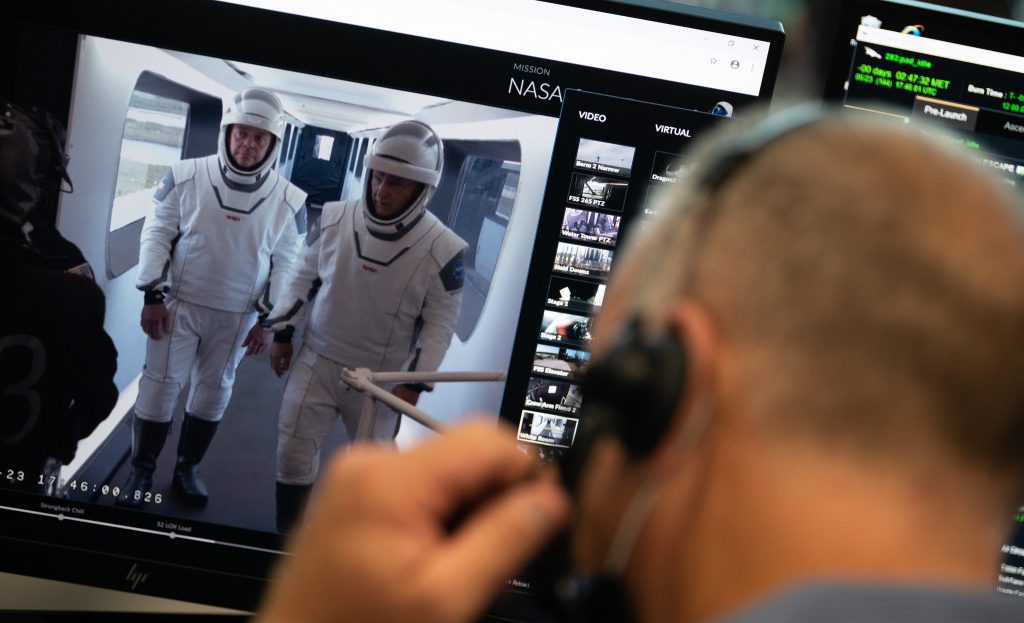 Wake up and tell the kids! Today is the day!… as long as weather cooperates and it looks like it’s going to! (and it didn’t which is why SATURDAY IS THE DAY! at 3:22 pm EST. for reals this time!) Saturday, Elon Musk’s company, SpaceX, will launch astronauts to the International Space Station aboard an American made spacecraft, from U.S. soil. This hasn’t been possible since the space shuttle program was shuttered nine years ago. We’ve relied on Russia to send our scientists to that orbiting lab known as ISS.

But Saturday afternoon at 3:22 p.m. EST, America will be back in the game.

Want to get involved? You can start at the breakfast or lunch table, by taking a VIRTUAL tour of the launch pad! Click here to sign up for access with NASA. As I write this, I can literally hear Angela Lansbury and Jerry Orbach singing “Be Our Guest!” That’s how excited I am. Because it’s LAUNCH day!!!!

So how did SpaceX get to this point? It was not an easy road. Here are THREE major problems SpaceX had to solve!

Problem #1) It’s not that easy to build  a rocket from scratch and send it to orbit. Elon staked his Paypal fortune on it and almost lost it all. The first launch failed. Millions of dollars gone. The second launch failed. More millions evaporated. The third launch failed. Elon was almost out of money. He could eek out one more attempt to reach orbit. That fourth launch was a success! That allowed SpaceX to land lucrative contracts and begin developing the rocket we’ll watch launch today.

Problem #2) An escape system. When sending humans into space today, they are riding in a capsule that sits on top of the rocket. And they need an escape plan. SpaceX’s capsule is called the Crew Dragon. The company had to come up with ways to abort the astronauts’ mission during and after lift off. And that had to be tested. One, the capsule has its own engines to blast away from the rocket. Then when falling back to earth a parachute system deploys to slow it down. You can watch awesome video of the test of this system here.

Problem #3) Landing a rocket. Getting the cost of rockets down was and is an essential part of SpaceX’s plan. The example I use in my book, ELON MUSK: A MISSION TO SAVE THE WORLD, is imagine driving the kids to school every morning (back when they went to school) and imagine throwing the car away once you reach the carpool circle. At some point during the day, you buy another car and repeat this same routine every time you want to take them somewhere. Pretty expensive, right? This was the financial reality for launching rockets… unless, you could figure out how to launch a rocket, return it to Earth, land it, and reuse it. Want to visualize how insanely difficult that was? Look no further than SpaceX’s blooper reel of all the explosions leading up to their eventual success. The kids will LOVE it!

So, those are just three major problems SpaceX had to overcome! Today is another step. This launch is actually a test. If this launch goes well, SpaceX will be certified for human space flight. Every aspect of today’s flight will be gone over with a fine tooth comb so any issues large or small can be addressed, refined, or reimagined.

Here is the link for the complete countdown schedule down to the second of every aspect of prep, launch, spaceflight, and landing for today’s mission. SpaceX will attempt to land the Falcon9 on a floating drone ship, while the space capsule will continue on to the International Space Station!

Now if you want to use today’s launch as part of homeschool with ongoing lessons… here’s a link to NASA’s STEM engagement a.k.a. homeschool.

If you want to learn more about Elon Musk and how he he got here, check out my book Elon Musk: A Mission to Save the World. You’ll discover how Elon journeyed from bullied school boy to billionaire and all the problem solving required along the way!

To celebrate Saturday’s launch, I am GIVING AWAY a signed copy. Comment below and subscribe to my newsletter (upper right hand corner) to enter!

Enjoy today. Coverage starts around 2pm EST. You can watch the launch LIVE here. And just know I’ll be jumping up  and down in my living room, cheering on our hopeful future!