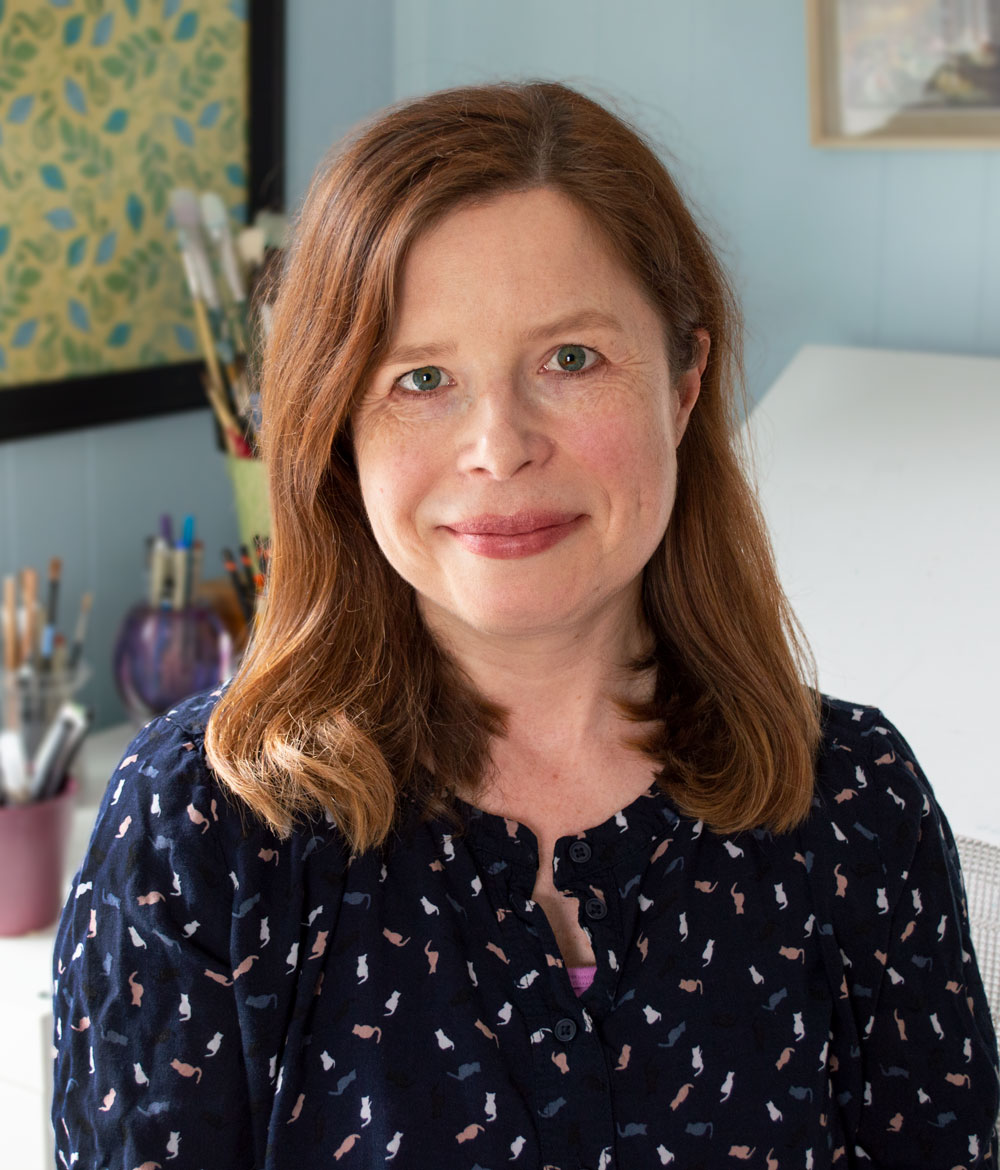 Fine tune your radar screens, my friends. I have a debut illustrator that you should be watching closely and snap up our book! Vita Lane brings joy, texture, symbolic, and playful color palettes to her work.

Our book, Chowder Rules! The True Story of an Epic Food Fight presented an interesting challenge because it’s a true story that took place in 1939 so had to be grounded in a specific place and time. And yet the main characters and story itself have so much fun and whimsy. Approaching the visual storytelling could be tricky. But, having seen the final art, I can tell you we have so much to look forward to when this book is published this fall!

First, a quick summary of the book:

What kind of fearsome food fight could draw in Baseball great Joe DiMaggio? A fight over chowder! It all started with a Maine lawmaker who adored his beloved steamy, creamy, dreamy clam chowder. News that Manhattanites were plunking tomatoes into the chowder pot, had Representative Cleveland Sleeper seeing red! Not his favorite soup! So he proposed a bill to make it a crime to add tomatoes to clam chowder. New Yorkers were offended! A war of words raged, until finally a duel of chefs settled the matter once and for all.

So how did illustrator Vita Lane and the team at Islandport Press settle on back-to-back dueling chefs? Vita fills us in! 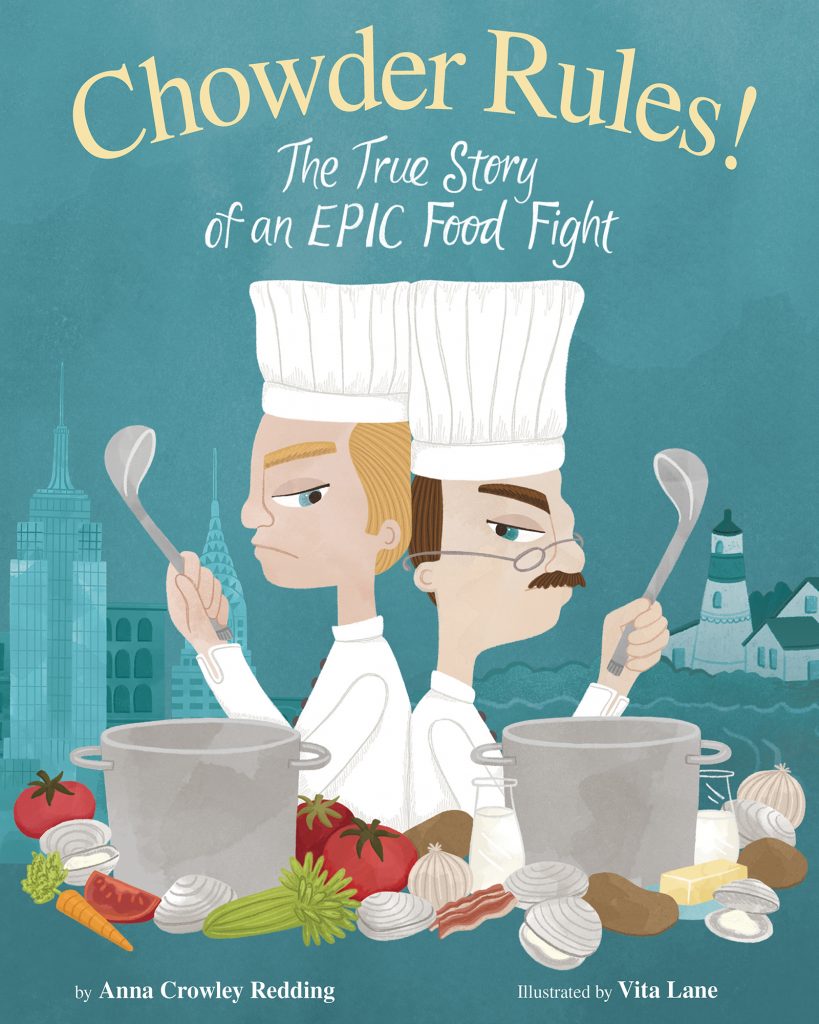 The gorgeous cover illustrated by Vita Lane and Designed by Teresa LaGrange!

Vita – The Islandport team and myself considered a handful of concepts for the cover – a giant pot of N.E. clam chowder on the front cover with a giant pot of Manhattan clam chowder on the back; a close-up of Sleeper and Tully face-to-face, with Sleeper holding a clam and Tully holding a tomato; a newsie holding the front page of a newspaper with the title on it and a “photo” of our rivaling characters; Sleeper at his typewriter; etc – but ultimately went with Sleeper and Tully back-to-back in a dueling pose, ladles at the ready, which is a nod to the interior spread of the book where Tully challenges Sleeper to a cook-off. I’m so pleased with the decision and am very happy with how it came out.

Anna – Now, one of the things I LOVE about the cover, is the skyline and lighthouse in the background! Such impactful storytelling.

Vita – Teresa Lagrange, the designer and art director at Islandport, suggested the addition of the locations in the background, which help to highlight the New England / New York rivalry. So smart!

Anna – Another standout not only of the cover but the entire book is the color palette (or color scheme) used throughout the book. It’s clean. It’s simple and pleasing––and yet offers incredible texture and depth.

Vita – The color palette for the book is loosely based on the ingredients (and locations) themselves. Ecru, yellow, grays and browns of New England clam chowder, the blue sky of Maine, and pinks, reds and shades of green of Manhattan clam chowder are all represented. 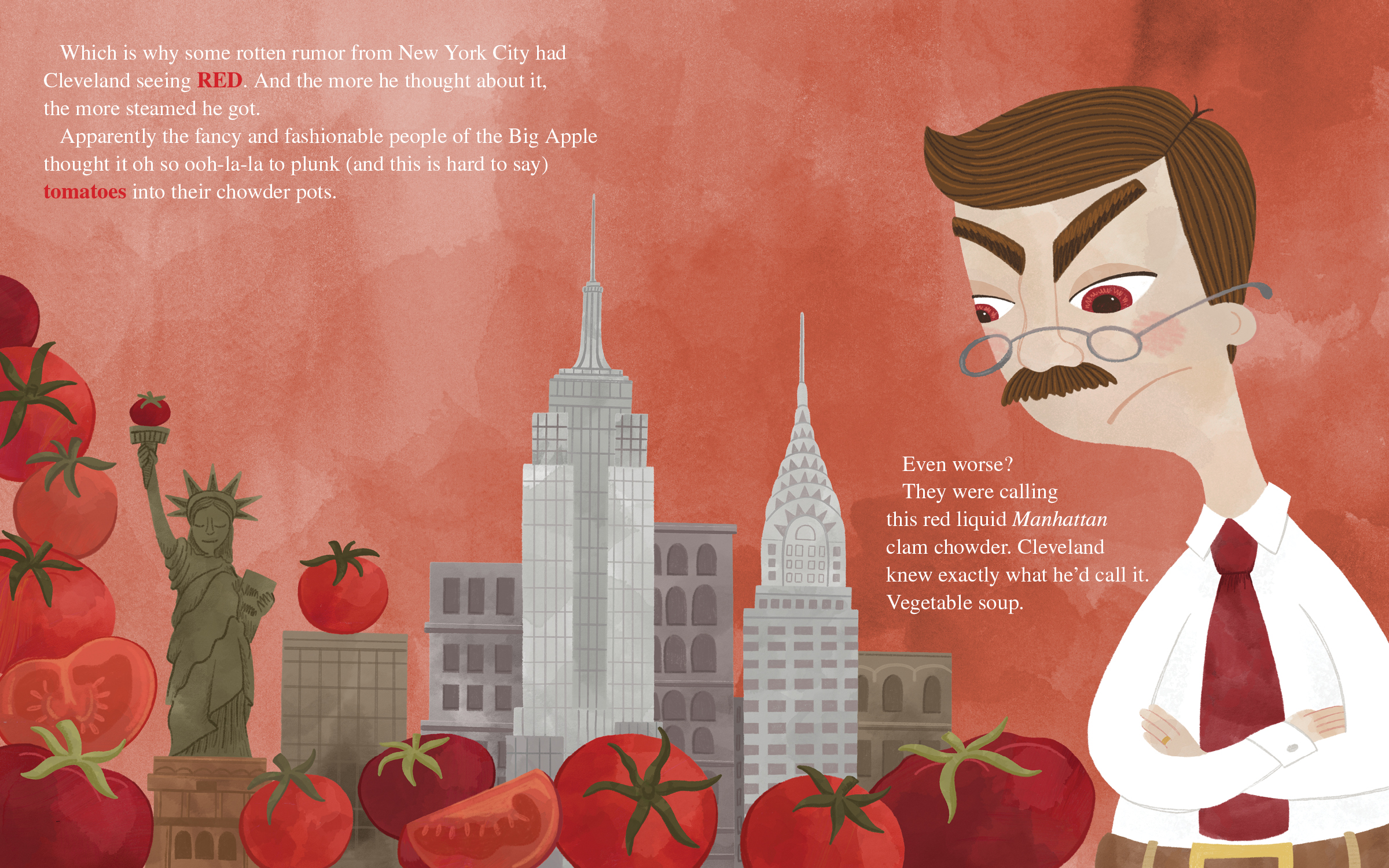 You can’t see me, but I am giving her a standing ovation!! I learned so much by talking with Vita about illustrating the cover of Chowder Rules! I hope you did, too! You can check out more of Vita’s work on her website and follow her process on Instagram. This is Vita’s debut picture book. Friends, pre-order Chowder Rules!. The smile it is going to put on your face is a gift to your future self! Believe me. I laughed out loud writing it and you are going to laugh out loud reading it!

Tomorrow, we’ll hear from another critical member of the publishing team, the art director. We’ll talk about an art director’s role and dive in to book design. I’m so excited! This series is a great one to share with your kiddos. There are so many ways to get involved in making books!