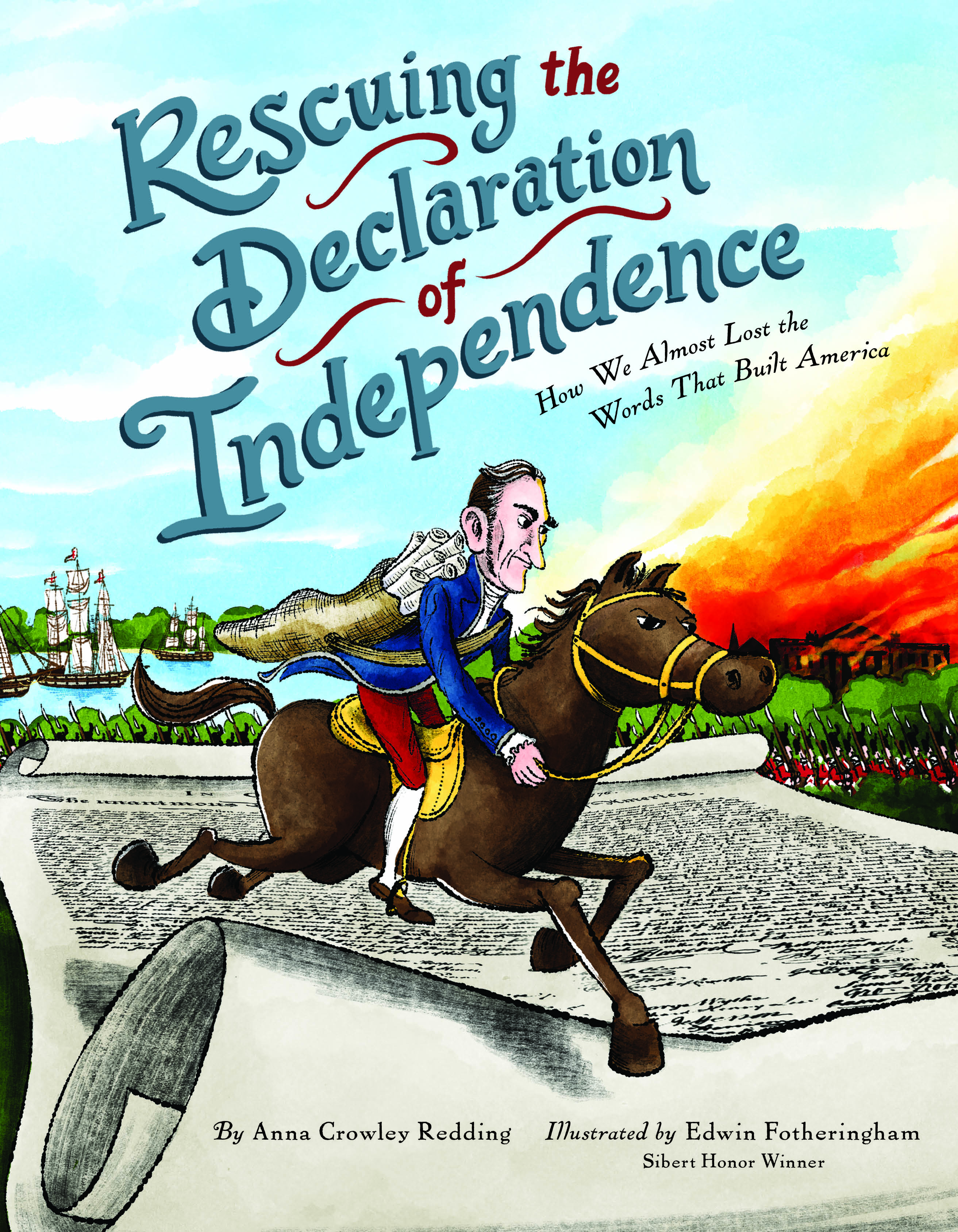 Oh, friends! I am so happy to reveal the cover of my debut picture book: Rescuing the Declaration of Independence: How we almost lost the words that built America. This is the harrowing tale of a long-forgotten hero: Stephen Pleasonton. And without this brave soul, we would’ve lost the Declaration of Independence, The U.S. Constitution, the Articles of Confederation, George Washington’s journals, and more. He saved them all from British torches during the War of 1812. I know what you are thinking…why have I never heard about this before?! And that’s the same thing I thought! Well, I am thrilled that Stephen Pleasonton’s heroic efforts will fill the pages of a gorgeous picture book on sale in April 2020 from Harper Collins.

But April seems a million years from now. So, today? Well, today, I have the enormous pleasure of revealing the cover! This action-packed cover is the work of illustrator and Sibert Honor winner Edwin Fotheringham. Your eyes have surely danced across the sensational pages of other books he’s illustrated. Some of my favorites are A Home for Mr. Emerson, What to do About Alice?, Tony Baloney, and Those Rebels, John and Tom.

If you read Ed’s bio here, you’ll soon discover his adventure on this planet has been wicked interesting, to say the least. So, without further ado, here’s a quick interview with Ed about this magnificent cover!

Anna – Congratulations on such a beautiful cover! I want to delve right into the visual storytelling because it is next level. Our main character, Steven Pleasonton, is a forgotten hero who pulled off a heart-stopping rescue of the Declaration of Independence and other documents. Had you ever heard of this story before you read the manuscript?

Ed – Not even a little! The intricacies of the War of 1812 barely registered, in fact (I was brought up in Australia). The thing I have most enjoyed about illustrating historical picture books is learning about new stuff. It never gets old.

Anna – There is so much action and movement in the cover. It’s compelling and urgent and as reader, it’s inviting. I want to pick up this book and find out what happened. How did you pull that off?

Ed – Thank you for your kind words… I guess the reason for the kinetic activity on the cover is to create visual anticipation of action and suspense in what might, on first take, be considered a passive topic. It’s not a passive story.

Anna – Stephen Pleasonton and his horse look as if they are going to gallop off of the book. How did you get them to pop off the page?

Ed – Having the Declaration of Independence act as a jumping off point, rolling towards the viewer, helps a lot… otherwise it’s just a bit of foreshortening (art speak for controlling perspective and depth) and, especially, using the shadow below the horse’s forward hoof to indicate it being in front and above the roll of the paper.

Anna – One of the many things that I love about your historical picture books, is the use of documents and maps as an essential storytelling tool. What challenges does that present in placing the documents so firmly in the action? Getting the perspective right as the lettering travels off into the distance, that looks really hard. And yet, it is so effective. Tell me about that.

Ed – Luckily, the style I work in allows for quite a bit of leeway with regard to perspective accuracy (or inaccuracy!). I set the lettering so it gives a vague illusion of depth, but it’s nowhere near correct, which allows for a lot of fudging room. That’s important when laying out type since the legibility of the information is more important than creating perspective. It seems to work.

Anna – Your color palette. Tell me your process for choosing color and why you like to keep it simple.

Ed – I think a simple color palette used throughout a book, or in a pattern, gives a sense of unity when turning from page to page. That makes for a complete, whole object, which is what I want the book to be.

Anna – When you are designing a cover, are you thinking about how readers look at it, where their eyes are first drawn and they take in the rest of the page?

Ed – Honestly, as an illustrator, I don’t usually “design” the cover so much as I provide space for the title and author names. That job is often left to the designer. I treat the cover much like I would a poster… It’s a hierarchical display of information.

Anna – There is only one picture of Stephen, and it’s not a glamour shot. Did that limit you in your depiction of him or did it allow for greater artistic freedom?

Ed – I loved that no one would know what the man looked like… It let me create a version of Mr. Pleasonton that was not quite accurate, but not completely off either. I found it freeing.

So, there you have it! Much more on this book soon. In the meantime, I have another book coming out NEXT WEEK! July 2ndyou’ll be able to pick up a copy of Elon Musk:  A Mission to Save the World wherever fine books are sold. If you would like to order a signed copy, click here!

P.S. Let’s stay in touch! Sign up for my newsletter in the upper right-hand corner of this blog.